The most popular sour fruit of Malaysia is Buah kedondong. Its ID is Spondias dulcis, also known as Ambara in Malaysia, June plum in Jamaica. Its common name is golden apple or tropical apple. 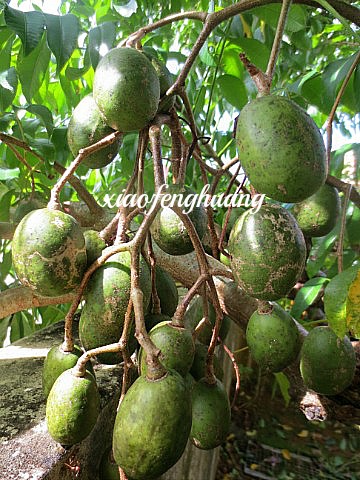 The mature fruit is crunchy, tastes sourish sweet with a very fibrous and spiky pit. The fruit is green and on ripening turns yellow. The ripe fruit is sweeter and more juicy than the green fruit but less crunchy. It is best described as a mix of a mango and pineapple. Most people would eat the ripe fruits raw and leave some of the green fruits for pickles or eaten raw with rojak, gado-gado or sambal belacan. When we were young, we used to eat this fruit with thick soya sauce and sugar, especially when the fruits were too sour. Some locals cook this fruit in curry which tastes like terung dayak (local brinjal) in hot and sour soup.

Pickled kedondong is very popular in Penang and Sarawak. They are often sold at the roadside stalls in cities and towns of Malaysia. They are pickled in the Chinese way, that is, the fruits are soaked in brine and a few strips of licorice are added. This make the fruits look yellowish and taste sweeter too.

Old people may find this fruit too hard to chew so juicing it is another option and kedondong juice is a popular drink in Malaysia. Another way of relishing this fruit is by grating or pounding it and mix with vegetarian belacan (preserved and fermented soya bean paste ) and chilli. Be careful not to pound the pit to avoid the fibre. Most Chinese in Sarawak and Kalimantan use this dish as appetizer. It is indeed very appetizing. Occasionally one can find this dish in some vegetarian cafes in Kuching city.

Nowadays, grafted variety of Buah kedondong can be planted in big flower pots. These are the dwarf type and the fruits are smaller and less crunchy than the fruits of the tall variety. Kedondong young leaves can be eaten raw. They can be used in Nasi kerabu (Malaysian rice salad) or simply eaten raw with sambal belacan.

The next popular sour fruit is the Belimbing Besi or belimbing buluh(Malay) or Belimbing Masam(Iban) as shown below. Its ID is Averrhoa belimbi L. Its Chinese name means wild star fruit (山杨桃). Although it is less well known than the kedondong, it plays an important part in local dish like the hot and sour soup or laksa. This fruit is the best substitute for Asam jawa and asam keping. Just simply add them to the soup to impart sour taste. It plays its role as a sour agent very well. Belimbing Masam tastes more sour than buah kedondong so it is quite impossible to eat it raw or even drink the juice. Some local people make vinegar with it. Making jam with it should be good. Most of us use this fruit as vegetable. My late mom used to steam it with balacan or salted fish and chilli. After steamed, it is less sour and the only side effect is the dish is too appetizing, good for growing teenagers. As a vegetarian myself, I steam the fruits with vegetarian belacan.

There are two varieties of belimbing masam, one is green skin when young and turns yellowish on ripening and the other one is yellow through out. I prefer the green skinned variety because of its better taste, more sour but with good flavor.

Another even less known sour fruit is called Buah Lakum. It is grown wild in the jungle, unlike the first two sour fruits which are cultivated quite commonly in villages. It is a climbing plant found along edges of secondary forest. Its common name is Fox grape with the scientific name of Cayratia trifolia. Its berries are green when young and ripen to deep purple. The berries look interesting due to its different shades of colours from green to pink and deep purple. The berries are smaller than a 10 cent coin.

Ripe fruits are sweeter and can be eaten raw. The green fruits cannot be eaten raw and are used for cooking hot and sour soup like belimbing masam. It can be propagated from seeds. Check table 3 for its nutritional value.